You are at:Home»News»Ferries and Cruises»First of new-generation hybrid ferries launches in Norway

Propulsion specialist Schottel has announced that Festøya, the first of four hybrid ferries for Norwegian ferry operator Norled equipped with its electric drive systems, has recently entered operation. According to the company, each of the four double-ended ro-pax ferries, built at the Remontowa shipyard in Poland, feature two of its SRE 340 EcoPellers, powered by a diesel-electric hybrid system and operated by battery power during transit.

The company says that the SRE 340, 2.1m-diameter (7ft) fixed-pitch propellers enables economical operation of the vessels at a service speed of 10kts and a free running speed of 12.5kts. The propulsion units are designed to provide full thrust in any direction, enabling precise directional control even in strong winds or currents. 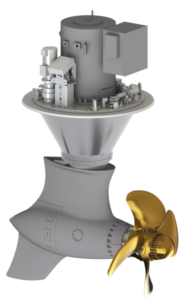